The aircraft, an ex KLM cityhopper, with a seat capacity of 80 passengers, traveled, after a thorough maintenance at Fokker services in Asia, via the U.S. to Curaçao. In the U.S. the aircraft was repainted in the colors of jetAir. JetAir will operate under the license of United Caribbean Airlines, an already existing operator. JetAir has been working on the process since October 2018 for obtaining the Airline Operating Certificate (AOC), and with the arrival of the aircraft the airline will enter the final stages for obtaining the AOC. The company hopes to receive all the necessary permits during the month of April, so that they can start with the commercial activities. During the month of April, the 2nd Fokker 70 aircraft from JetAir will also arrive in Curaçao.

This aircraft will serve as spare capacity and is intended to provide the on-time performance for the future operation.

The airline will focus on direct connections between Curaçao and the region, and specifically on the traditional routes that have also been served by previous airlines, and where there has always been high demand. The company does not want to release exact details yet, but they do want to reveal that routes such as Trinidad, Jamaica, Haiti and Medellin will be possible again.

The sale of the tickets will start as soon as the company has more clarity when the AOC will be issued. 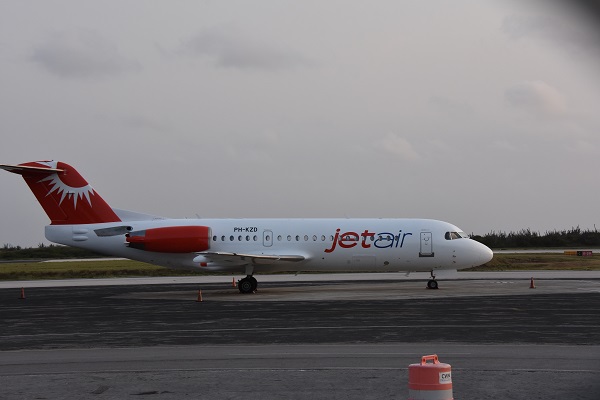