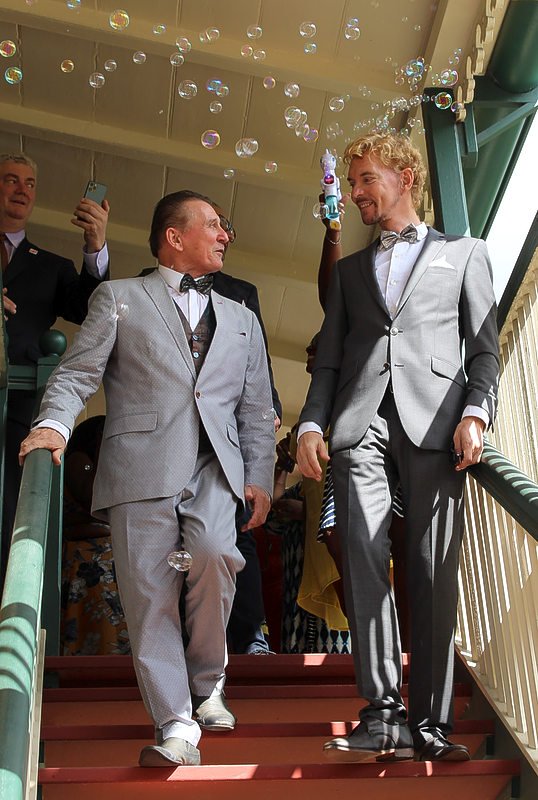 Hellebrand’s mother Elly quoted a scripture from the Bible stating, “You can have everything in the world, but if you don’t have love, you do not have anything.” Hellebrand’s sister Esther and his brother Ralph also travelled to St. Eustatius to their sibling’s wedding.

Also present for the ceremony were Netherlands Institute for Human Rights President Adriana van Dooijeweert and her policy advisor Vlada Burmistrova, Deputy Government Commissioner of St. Eustatius Mervyn Stegers, and many family members and friends of the couple.

Van Dooijeweert said she was very happy and proud to be present for the first inclusive, public same-sex wedding in Statia. “I was very proud to give a speech about the fundamental right of two people to marry, man and man, and also woman and woman,” Van Dooijeweert said.

Article 12 of the European Convention of Human Rights gives everyone this right.

“This is a very public event with lots of people here and I was very happy to hear that when Walter announced that he was going to get married a lot of his colleagues said that they were happy for him. I think that’s the message for today,” Van Dooijeweert said.

As the wedding party left the Legislative Hall, attendees blew bubbles to celebrate the newlyweds’ union. Bubbles were blown instead of rice due to the harmful effect that uncooked rice has on wildlife.

After the ceremony, the wedding party went to a reception at Oceanview Terrace restaurant.

This was not the first same-sex marriage in Statia. Several other couples have tied the knot before, but these preferred their weddings to remain private.


Curaçao number one destination in the Caribbean for AIDA Cruises passengers
By Correspondent Feb. 7, 2023