WILLEMSTAD - On Sunday, January 6, the cruise vessel Norwegian Gem of the cruise company Norwegian Cruise Lines was in Curaçao for the first time. As usual, the captain and crew invited the port authorities, the agent and government officials to attend a ceremony to celebrate the so-called 'inaugural call' being the first visit of the ship to Curaçao.

The ceremony includes the traditional exchange of placards taking place between the ship's Captain and the representatives of the local port and in this case in the presence of Minister Steven Martina of Economic Development and representative of the shipping agent Maduro Shipping, Mr. Albert Elens.

The Norwegian Gem left on December 2 for an 18-day cruise from New York, spent 3 days at sea and the first port to visit was Curaçao with 2233 passengers aboard. Then the trip continues to Aruba, 2 different ports in Colombia, Panama, Costa Rica, Nicaragua, Guatemala, 3 different ports in Mexico to end in Los Angeles. 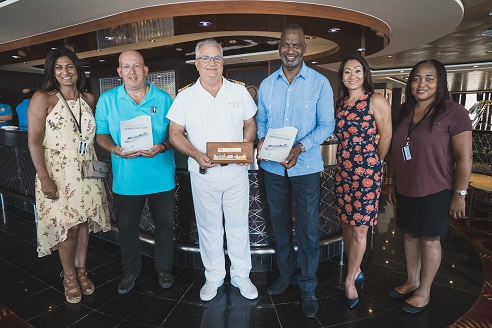