Venezuela celebrated a highly successful year in Sports and Culture

2021 was a good year for Venezuela. Our economy started to grow, political dialogue made impressive progress and free and fair elections were successfully held throughout Venezuela. However, there are two additional areas where Venezuela made major advancements last year. I am referring to sports and culture. Venezuela succeeded in these two strategic areas like never before in recent history. Nonetheless, little has been said or reported, especially abroad, about our sporting and cultural achievements. 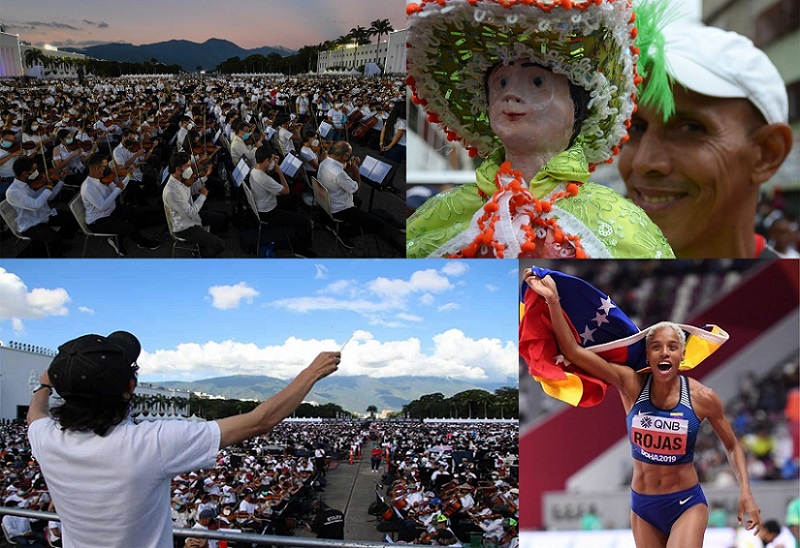 This is why I feel compelled to share with our Caribbean friends some of our outstanding records in 2021.

Firstly, our beloved, charismatic and yet humble Yulimar Rojas broke both a world record and an Olympic record in Tokyo, thus becoming the first Venezuelan woman ever to win an Olympic gold medal. Rojas, 26, became triple jump champion in the Olympic Games and was awarded, along with Argentine football player Leonel Messi, best athlete of the Americas in 2021 by the International Association of Sports Journalists (AIPS).

However, Rojas was not the only Venezuelan medallist in Tokyo. Venezuela also won three silver medals: two in weightlifting (Julio Mayora and Keydomar Vallenilla) and one in BMX cycling (Daniel Dhers), as well as six Olympic diplomas. All in all, Tokyo has been so far the best ever Venezuelan Olympic performance.

Additionally, also in Tokyo, Venezuela exhibited the best ever Paralympic team, with a total of seven medals and 17 diplomas. Our most outstanding Paralympic athlete was Lisbeli Vera in track and field. Vera won two gold medals in 100 and 200 meters and one silver medal in 400 meters. Equally, Tokyo has been so far our best Paralympic performance.

In October, Venezuelan cyclist Lilibeth Chacón became the champion of the 2021 edition of the prestigious and rigorous Tour of Colombia, defeating long-established cycling teams from Europe, North America and South America.

Women’s football has developed tremendously in Venezuela. Our best football player, Deyna Castellanos, who plays forward for Atlético Madrid in Spain, was awarded the best female football player of the month (December) for scoring three goals with two assistance.

Although baseball is not a big sport in several countries, I would like to mention two important Venezuelan achievements in 2021. Firstly, Venezuela won the Under-23 World Cup championship, held in Mexico. In addition, Venezuelan Miguel Cabrera from the Detroit Tigers reached the 500 home-run mark in the Major League Baseball of the US. Only 28 sluggers in more than a century of professional baseball in the US have batted more than 500 home-runs.

In terms of Venezuelan culture, our achievements in 2021 were equally resounding.

2021 was the year of the bicentennial of the Battle of Carabobo (1821), where Venezuela gained its independence from Spain. Hence, there were major cultural events and activities to celebrate the occasion, among them: the painting of murals across Venezuela, the opening of the impressive Bicentennial Monument right where the Battle of Carabobo took place, the staging of a major musical performance (called “Al Descampado”) and last but definitively not least the production of a TV series of a very high quality called “Carabobo: Caminos de Libertad” (Carabobo: the Road to Liberty).

Two major annual book fairs were held in Venezuela: the 12th edition of the Book Fair of Caracas in July and the 17th edition of the International Book Fair of Venezuela (FILVEN) in November. The latter was visited by more than 75 thousand people, who attended 900 cultural events and witnessed the launching of 125 newly published books.

Also, in terms of books, the Venezuelan National Centre for Books (CENAL) registered a total of 3,050 newly published books, an increase of 40 per cent compared to 2020. All of them were properly registered in accordance with the International Standard Book Number (ISBN).

In cinematography, the Venezuelan film “Un destello interior” was successfully released in 2021 and nominated as a candidate for the 2022 Oscar Academy Award for Best Foreign Film, quite a distinction as Venezuela will soon celebrate its 125th anniversary of film-making.

Then, in August, under the theme “People in Resistance,” Venezuela hosted the 4th edition of the Biennial of the South, where more than 200 artists from 27 different countries exhibited their masterpieces. Indeed, Barbados was one of the countries represented in this Biennial with a sculpture of “Negro Primero,” an Afro Venezuelan hero from the Battle of Carabobo, elaborated by Bajan artist David ‘Guru’ McClean.

Next, in the month of September, the Venezuelan Ministry of Culture launched an online cultural channel called “Cultura Venezuela” (Venezuelan Culture). This channel, totally public and free of charge, is fully available 24 hours a day to anyone interested in Venezuelan music, literature, cinema, dance and food, among other cultural expressions. You would only need to type “Cultura Venezuela” and a whole richness of Venezuelan cultural diversity will appear in front of you.

Then, in October, Venezuela hosted the 5th edition of the World Poetry Festival, where more than 100 poets from all over the world gathered under the theme “I see history in your face.” In it, they celebrated the 199th anniversary of the poem by Venezuelan Liberator Simon Bolivar entitled “My Delirium over the Chimborazo.”

In terms of tourism, Venezuela successfully hosted the 14th edition of the International Fair of Tourism (FITVEN), where 75 delegations from 16 countries attended and exhibited their tourist offer. Several deals and agreements on tourism were signed at the 2021 FITVEN in December.

I have left the best for last: the largest ever symphony orchestra and UNESCO’s recognition of the festivities around St. John in Venezuela.

In November, 12 thousand musicians from the Venezuelan System of Youth Orchestras and Choirs (best known as El Sistema) filled the huge courtyard of the Military Academy in Caracas to play several classical music pieces, among them “The Slavic March” by Tchaikovsky. This concert was witnessed by representatives from the Guinness Record who a few days later awarded Venezuela with a world record: the Largest World Orchestra.

Finally, in December, UNESCO officially registered the Venezuelan festive cycle around the cult and worship to St. John the Baptist as an intangible cultural heritage of humanity. This is a very colourful, artistic and traditional activity celebrated in several regions of Venezuela, mostly on the northern Caribbean coast. Every year, in the month of July, musicians, worshipers and festival-goers alike pay tribute to St. John while dancing to the beats and rhythms of Afro-Venezuelan drums.

This is the eighth Venezuelan cultural expression registered by UNESCO as intangible cultural heritage of humanity.

There is no doubt that all the aforementioned sporting and cultural achievements are extraordinary, but more importantly they are not only the result of ingenuity by particular individuals. Instead, they are the result of careful planning that has included Venezuelan people, communities and collectives. In fact, it has been a team work that has brought joy and happiness to all, as well as pride, education and a sense of belonging.

These results have been like a virtuous circle. On the one hand, one achievement tends to foster more achievements. On the other hand, and equally important, these series of sporting and cultural accomplishments have helped brought Venezuelans from different political tendencies together, and in turn such progress has also facilitated the easing of national political objectives, such as: the conduction of elections and political dialogue.

It goes without saying that Venezuela has succeeded in all these remarkable endeavours in spite of the dreaded Covid-19 pandemic - notwithstanding Venezuela is the best South American performing country in containing Covid-19 - and also in spite of the illegal, unilateral and coercive financial blockade by the US (mainly, but not the only one) against the Government and People of Venezuela.

We are moving forward in 2022, cognizant of national, regional and world difficulties, but equally hopeful that based in our cultural identity as peaceful people, Venezuela will continue traveling in its path of progress.

By Alvaro Sanchez Cordero, Charge D’Affaires of the Embassy of the Bolivarian Republic of Venezuela to Barbados