Iran, Iranians, and everyone else

The Iranians call the USA "The Big Satan." In the Caribbean and the Americas, Members of the ‘Bolivarian Alliance for the Peoples of Our America’ [ALBA] call the U.S. "The Empire."

ALBA members have referred to the U.S. as satanic and often said: "you can smell the sulfur." Ralph Gonsalves extreme left wing prime minister of tiny Saint Vincent and the Grenadines [SVG] [members of ALBA] is recorded as several times describing the U.S. in Cuban meetings as "the Empire." ALBA, as a block or a group, all support Iran. Iran is an Observer Member of ALBA. Iranian military manned and instructed at the ALBA military school in Bolivia until recently, now having left for Venezuela after the People's Popular Uprising and the overthrow of the Bolivian President Evo Morales. The Iranians also mine uranium in Venezuela, which they use for their nuclear processing in Iran. So we can perhaps understand why in 2010 the 'Tehran Times' published this "The countries of the ALBA alliance have expressed their support for Iran's right to use nuclear energy meant for peaceful purposes and have condemned the imposition of sanctions on the country." 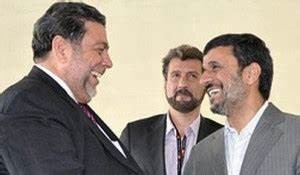 Gonsalves arrived in Tehran Monday to hold talks with Iranian officials and was welcomed by Iran's Vice President Parviz Davoudi.

Ahmadinejad pointed to the good relationship between Iran and Saint Vincent and the Grenadines, saying the two countries can boost their economic relationship and coordinate their stances at international forums.

Gonsalves briefed Ahmadinejad on the latest developments in his country and assessed his talks with Iranian officials as positive.

So there is an active and intense Caribbean/ALBA link with Iran. For ALBA to offer assistance, sustenance, succor, and support to Iran encourages them to be worse.

A new problem is now, ALBA member SVG has been appointed as a two-year member of the U.N. Security Council, and is aligned with Iran, can they be trusted to do the right thing? Gonsalves already votes in tandem with or in support of Iran in the United Nations General Assembly. Vote sold and paid for.

Venezuela and Cuba and the ALBA group view the United States as an imperialist nation, obsessed with spreading its form of government where it is not wanted and, as a result, they consider the country a threat to their national interests. In January 2007, Chavez and Ahmadinejad reached a deal to unite against what they termed U.S. imperialism, going so far as to earmark a $2 billion joint fund to provide military aid to other nations they identified as having anti-U.S. interests. Iran did its best to bring their hatred of the U.S. right to the back yard of the U.S.

The most hated enemy of Iran is Saudi Arabia. While the Iranian government and the majority of the people hate the USA for its sanctions, many people hate the USA and blame it for all of Iran's wrongs. Their hate for Saudi Arabia is for very different reasons. Even though both Saudi Arabia and Iran are Islamic theocracies, they belong to two different sects of Islam: Iran is overwhelmingly Shia Islamic, while Saudi Arabia is mostly Sunni Islamic. Both of the countries view themselves as the leaders of the Islamic World, and this makes them natural rivals. But it's not only about faith, but also about ethnicity and history: While the Iranian population is mostly Persian, Saudi Arabia is primarily Arab. There has always been a Persian/Arab rivalry in the Middle East. That has been going on for about 2000 years, which makes Saudi Arabia, Iran's biggest rival for influence in the Middle East.

Saudi has directly countered Iran at every opportunity. They will do whatever is in their power to bring Iran down. They are ancient enemies and perhaps always will be.

The UAE, Egypt, Pakistan, and most of Northern Africa are Sunny. Most of these countries are with Saudi Arabia. As well as stated above, they are considered by Iran as potential threats. In an all-out war, I doubt these countries would have minimal problems going against Iran in support of Saudi Arabia.

Mainly who hates who in the Middle East, boils down to the Shia-Sunni divide. Iran is a majority Shia Muslim country and is allied with the Shia countries of the Middle East, which includes countries led by Shia leaders; even if their population is majority Sunni [like Syria]. Iran happens to be at the lead of these countries through its infiltration, military support, and direction.

The Sunni countries of the Middle East, led by Saudi Arabia, are the enemy of Iran. You can almost always understand who is against whom when it comes to Iran by merely determining which party is the Shia and which is the Sunni.

The second arch-enemy of Iran is not the USA, but Israel. There is anti-Semitism in Iran amongst the general public, and the government uses Israel as a scapegoat because of this badly want to destroy Israel. Given the opportunity, they would attempt to destroy them. That would probably prove a fatal move on the part of Iran because Israel has nuclear missiles and would not hesitate to use them in self-defense. The Iranians consider any nation who is not Muslim as infidels, and worthless dirty dogs. They do not want atomic weapons to attack the U.S.; they want those weapons, crave those weapons, to attack Saudi Arabia and Israel.

Iran’s allies are allies for different reasons. Some because of religion, some for political and financial goals. Russia, China, India, Venezuela, Cuba, and the rest of the ALBA group, being infidels are certainly not linked allies through religion. They are mostly connected as strategic and commercial partners. While Yemen Lebanon, Iraq, Syria, Turkey, also groups such as Hezbollah and Iraqi Shiite militia are religious allies.

I have said this several times before in my writings. It is time for the U.S. to take another look at the Americas and Caribbean countries that support Iran for whatever reasons. The U.S. is continually plying the Caribbean with USAID, and the leaders of those countries are not at all grateful. In fact, in return, they are downright disrespectful and a danger to the well being and good of the USA. It emanates from Cuba and is spread through ALBA by some of its spokesmen, such as Ralph E Gonsalves.

There is currently a USAID funding for schools that appears to be almost Caribbean wide [ELP]. So some ALBA members take the aid and simply fail to tell their public where it came from.

Most of these countries support and help Iran with its dangerous and nasty American hatred. The majority of the peoples are great, even in Iran, some friendly people would love to have peace and good relations with the U.S., but the leadership is stopping the people from having what they deserve, friendship, and goodwill.

America has left acting against Iran until very late in the scheme of things. Perhaps, they should have moved a long time ago. They have had good reason to do so on many occasions. Until Trump's recent removal from this life of the Iranian Gen Qasem Soleimani, not enough courage has been available in the previous US presidents.

Should we continue to allow Iran and its leadership to hold the World hostage whenever they feel like it?

America was not built on fear. America was built on courage, on imagination and an unbeatable determination to do the job at hand.
Harry S Truman


Those who remain silent approve the ground lease of sixty years to Klesch
By Sharnon Isenia Jan. 23, 2020