Member of the strategic core group of the Curacao Doughnut Economy (CDE) taskforce. The Curacao Doughnut Economy taskforce is a social movement. The aim of the task force is to create the first island doughnut in the world. The change and transition that CDE wants to unleash is called circular economy. The basis of the circular economy is the sustainability and innovation of production processes, and the underlying business models. https://www.facebook.com/curacaodoughnut

‘Curaçao is a pioneer in showing how a Caribbean island can start putting 21st century economics into practice in order to create a regenerative future.’                   Kate Raworth, March 2021

The first steps to change

Curacao has a good basis to become the world's first 'island doughnut'. There are plenty of existing initiatives that focus on making the island sustainable. That is one of the conclusions that was drawn up of the report 'Curacao Doughnut Economy - A New Compass for Economic Prosperity ’. On March 24th of this year a report was approved by the Council of Ministers as a policy plan for the integral development of Curacao. This after a presentation by Joeri Oltheten and Juan Carlos Goilo supported by Stacey Mac Donald as an eye whiteness of the strategic core group.

The doughnut economy is of the British economist Kate Raworth. It connects environmental, economic and social principles for a sustainable transition from a linear towards a circular economy. The report is a first step enabling the preparation policy, the promotion and the implementation of a more circular economy in 2030 for Curacao. The principle of the doughnut economy functions as a compass with the aim: to be able to develop the economy in such a way, so that a better balance is created over time between the fulfillment of social needs of the inhabitants on the one hand and on the other hand within the ecological limits of the earth and Curacao in particular.

The doughnut consists of two concentric rings: an inner ring and an outer ring. The inner ring represents twelve (12) social foundations, derived from the Sustainable Development Goals (SDGs), that are needed for a society to develop successfully. The outer ring represents the earth’s nine (9) ecological boundaries, developed by Rockström and his colleagues in 2009. These go far beyond the ecological aspects of the SDGs. Raworth’s seven principles support economic prosperity from this inner and outer ring of the doughnut model.

The doughnut economy urges us to continue challenging ourselves to pay attention to the planetary system as a whole (principles 1 and 2). It reminds us of the importance of human socio-cultural development, our ability to organize, and to pay attention to the general education of mankind (principle 3). It also appreciates the diversity, dynamics, scale, and complexity of the interacting systems (principle 4). It emphasizes the importance of an open institution relative to the economy, in which power is not centralized but shared (principle 5). It advocates an economy that constantly reinvents itself ecologically, financially, and socially (principle 6). While Raworth acknowledges that economic growth is sometimes needed, the doughnut economy shows that there are several ways to grow beyond just GDP growth or an increase in gross value added (principle 7). The goal is to let humans and the environment flourish. GDP growth should serve this purpose, instead of being a separate goal.

The doughnut economy leads to a compass that makes the direction of our country value-driven. The model creates this by asking the central question: How can Curaçao be a place for human development and where people flourish, with respect for the wellbeing of the whole planet and all inhabitants? To make this big question manageable, it is divided into the four questions in the quadrant above. The questions help the island think about the local and global dimensions, as well as the social and environmental dimensions of an economy.

A view of the data collection

Before making the Curaçao Island Snapshot, first ecological and social categories of the doughnut model, which are relevant for the island were first analyzed and identified. Subsequently, various official sources were consulted to identify the extent to which Curaçao meets the social needs and exceeds or does not exceed the ecological ceiling. The snapshot shows that on the basis of this data there is still much work to be done in Curaçao, if we want to be a part of the doughnut economy. Poverty, lack of knowledge, inequality and unemployment on the island are reflected in the way we pollute and neglect our environment. The red discs pertaining to the social fundament show which essential social needs the island is currently lacking. The red discs outside the ecological ceiling show the current exceedance of ecological boundaries. 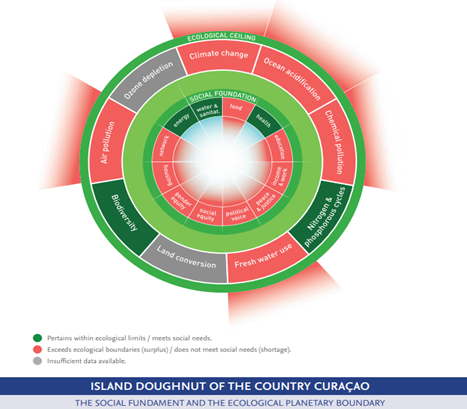 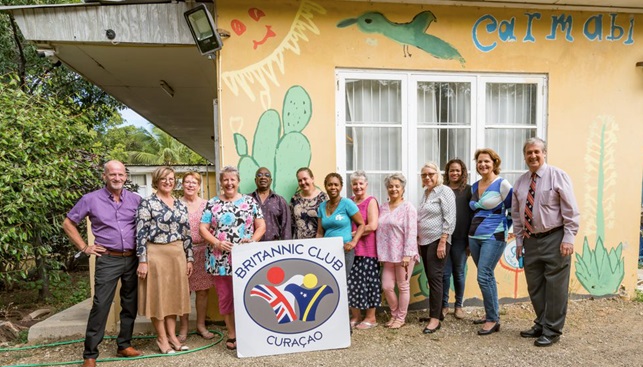 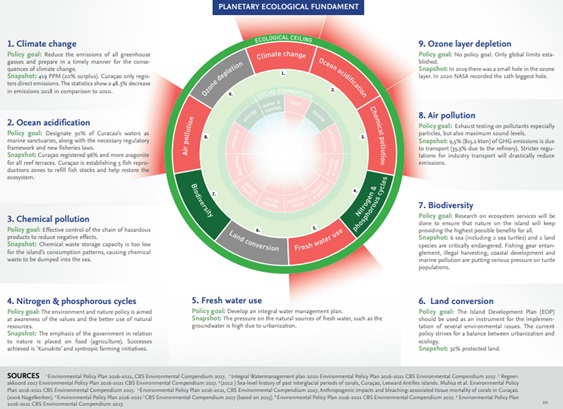 The snapshot of Curaçao shows an alarming picture of the Curaçao economy, both socio-economic and ecological. Curaçao does not meet the limits imposed by the model on several fronts. Five of the nine ecological indicators and nine of the twelve socio-economic indicators provide worrying insights. Curaçao lacks a social foundation, and this has its impact on the climate. More research is needed to find out exactly how this social foundation can be built on a sustainable basis.

With the right priorities, work programs, and projects, the government of Curacao can help facilitate to create a path towards 2030 that will make the island a leader for sustainability in the Caribbean. But it is particular initiatives with various forms of social and business entrepreneurship. These as part of an integral public-partnership approach, which really will make the difference and induce the needed transformation into best practices. In 2030 Curaçao will be then able to respect the well-being of all people on earth, develop a climate-proof island and handle regulations in an innovative way. This will automatically attract investors who drive sustainability and guarantee the prosperity of the Curaçao economy.

[1] The report 'Curacao Doughnut Economy - A New Compass for Economic Prosperity' is a product of Project bureau Circular Economy of the Ministry of Economic Development and was established in close cooperation with Curaçao Doughnut Economy Taskforce. The government of Curaçao shows gratitude to all parties involved for their valuable discussions and insights that have contributed to the creation of this first doughnut economy model for islands.