China offered some Pacific Islands including Fiji, Kiribati, Micronesia, Samoa, Tonga, and Vanuatu millions of dollars in assistance and loans and a free trade agreement. In exchange, Beijing would train their police forces, provide cybersecurity, expand political ties, conduct sensitive marine mapping and gain greater access to natural resources on land and in the water. The contents of this ‘security pact’ that normally are strictly confidential, became known because they were leaked.

In a 9th inning effort, the Chinese President tried to convince these islands that: “China will be a good brother”. 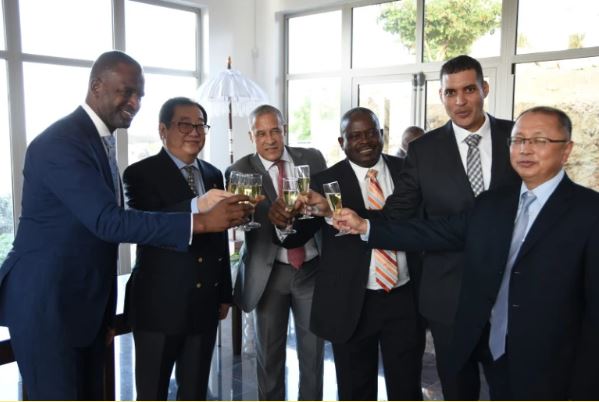 The Chinese Foreign Minister who was present in Fiji for a virtual meeting with the region thought this was a done deal. Yet, in the end, the small Pacific Islands rejected China’s offer because of concern with ‘China’s brotherly love.’, and a plain lack of confidence in Beijing. What happened this week is a major blow to China which assumed it could continue to overrun (small) developing nations with its wallet diplomacy.

Hopefully, we can learn from our Pacific Island politicians who rejected Beijing’s imperialistic diplomacy.

Unfortunately, China’s servants in Curaçao are still trying to convince us to go into business with Beijing. Remember the CEOs of major local State Companies toasting champagne with the Chinese Communist Party’s (CCP) representatives (see picture)? Let’s not forget that those representatives are still on our island and have the ear of many a politician.

Alex David Rosaria (53) is a freelance consultant active in Asia & Pacific. He is a former Member of Parliament, Minister of Economic Affairs, State Secretary of Finance and UN Implementation Officer in Africa and Central America. He’s from Curaçao and has a MBA from the University of Iowa. (USA).


Why is it so hard to persuade people to keep our island clean?
By Alex Rosaria Aug. 8, 2022