Admiral Faller assumed command of SOUTHCOM on November 26, 2018, and is responsible for all Department of Defense security cooperation in the 45 nations and territories of Central and South America and the Caribbean Sea. In his first 90 days as SOUTHCOM commander, he has visited Colombia, El Salvador, Guatemala, Honduras, Trinidad and Tobago, Brazil, and now Curaçao to hear partner-nation perspectives, concerns and ideas, and express the command’s unwavering commitment to its enduring partnerships with military and public security forces in the region.

Consul General Hawthorne said “this high-level visit demonstrates the importance that the U.S. attaches to our cooperation with the Dutch Caribbean islands and reinforces the mutuallybeneficial partnerships we have on a number of important issues.”

Admiral Faller met with Governor Lucille George-Wout and Prime Minister Eugene Rhuggenaath, in separate meetings, to express appreciation on behalf of the United States for hosting the U.S. Forward Operating Location (USFOL) – and Curaçao’s generous partnership and significant contributions in countering the flow of illegal narcotics throughout the region.

The mission of the USFOL on Curaçao and Aruba is defined in a bilateral agreement between the U.S. and the Kingdom of the Netherlands, and all operations carried out at the USFOLs are limited to activities that detect and monitor illicit narcotics trafficking.

Admiral Faller attended the unveiling of the USS ERIE Memorial plaque at Koredor in honor of those who made the ultimate sacrifice in defense of our freedom. While serving as the lead escort for a convoy, the USS Erie was torpedoed on November 12, 1942 by a German U-boat, a few miles off the coast of Curaçao. 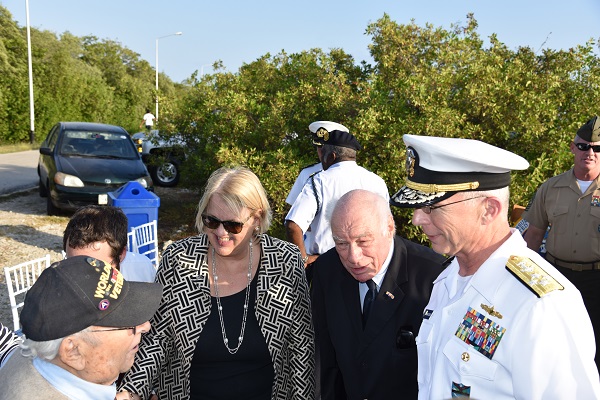