Scuba Lodge donates more than $ 2500 to CARF and GreenKidz

WILLEMSTAD - Boutique hotel Scuba Lodge & Ocean Suites in Pietermaai has donated $ 2,546 to the local foundations of the Curacao Animal Rights Foundation (CARF) and GreenKidz. The donations come from the Dollar-a-Night program that the boutique hotel launched in January 2017. Since then, donations have been transferred every quarter. 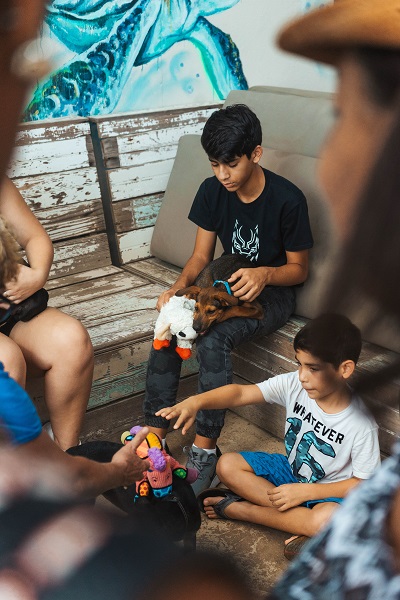 CARF received a check for $ 1,323 last week. $ 1,223 was raised for GreenKidz in the past quarter. For every night that a room or apartment is occupied by hotel guests, Scuba Lodge donates 1 dollar to charity. Those staying in the boutique hotel are asked to make a choice between CARF and GreenKidz. In this way, hotel guests are involved in the foundations supported by the hotel.

“The idea for the Dollar-A-Night program originated in 2016 when we were regularly told by tourists that litter and stray dogs on the island are like a thorn in their eyes. Scuba Lodge wants to mean something to the island and the people who work daily to make Curaçao better for tourists and residents,” says Christina Sieperda, General Manager at Scuba Lodge & Ocean Suites.

“That's why we chose to become regular supporters of CARF and GreenKidz. Two years later, both problems are still current and our hotel guests are still responding positively to our Dollar-A-Night program. It's great that every three months we can contribute to the noble work of both CARF and GreenKidz,” says Sieperda.

With the donation, veterinary bills are paid and young students are made aware of the environment and recycling. In addition to these gifts, both foundations can also count on the efforts of the Scuba Lodge team. For example, hotel staff assisted the CARF volunteers during a puppy adoption event on the city beach last weekend. Earlier this year, GreenKidz unveiled a special recycling wall on the beach at Scuba Lodge that was created by recycling artist Roberto Tjon-a-Meeuw and students.