Images of dangerous criminals released; help the police find them

WILLEMSTAD - Police have upheld the earlier threat to release images of the three wanted murder suspects if they do not report within 48 hours. 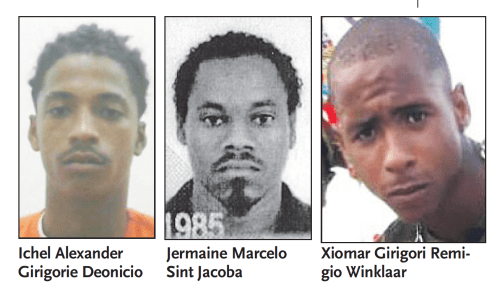 Images of Xiomar Girigori Remigio Winklaar, aka Taito, were distributed; from Ichel Alexander Girigorie Deonicio, aka Echo; and from Jermaine Marcelo Sint Jacoba, aka Chamo. Winklaar (March 31, 1999, residing at Kaya Meteorólogiko 47) is suspected of having shot 29-year-old Jahier Rudolph Evertsz in Kaya Neblina in Ser’i Papaya on January 6, 2020.

These three suspects have been on the wanted list since the murders, but without result. The police are therefore again making an urgent appeal to the Curaçao community to report tips. Anyone who has information about the whereabouts of the suspects is requested to report to telephone number 917.