WILLEMSTAD - Mrs. Weihong Shen, a high official of the Guangdong Chinese Overseas Affairs, was in Curaçao for a day on a private trip. She went to visit her daughter who is studying Spanish in Mexico and decided to visit the islands of the former Netherlands Antilles.

As a Chief of Department at the Overseas Chinese Affairs Office of the People's Government of Guangdong Province, she has been working with the local official organization for local Chinese community, the Curacao Chinese Association (formerly known as Chinese Four Villages Neighbours Club and later as Curacao Chinese Club) for many years.

Another reason for her visit is that Curacao is quite 'unknown'! Every time when she mentions Curacao, nobody knows. While Aruba is well known.

Having a long history working with our organization also makes her curious about this unknown island.

She is also writing a book that will be published in 2019.  The content is about the Former Netherlands Antilles and the actual Dutch Caribbean.

Her book is about islands in the Caribbean. Each of them is mentioned with the Chinese immigrants/communities. Especially about the rich history of the Chinese community of Curaçao. And some local landmarks. 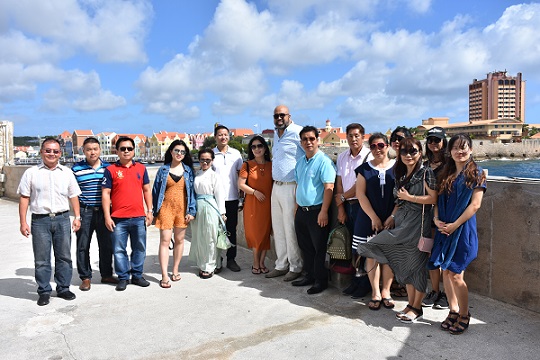 On the photos: Mrs. Wheihong Shen with the members of the Curaçao Chinese Association.


RIVM: Incidence seems to be stabilizing on the islands, Omicron responsible for high numbers
By Correspondent Jan. 17, 2022