Millions of people in China are on lockdown while the government tries to contain the spread of Coronavirus,COVID-19 infected around 87,000 people in more than 60 countries worldwide killing almost 3000, businesses are shut down threatening global economy & halting the operations of many depending on international companies causing a major decline in productivity & airline activity reshuffling the oil market, China is the world's largest oil importer and second-largest oil consumer. 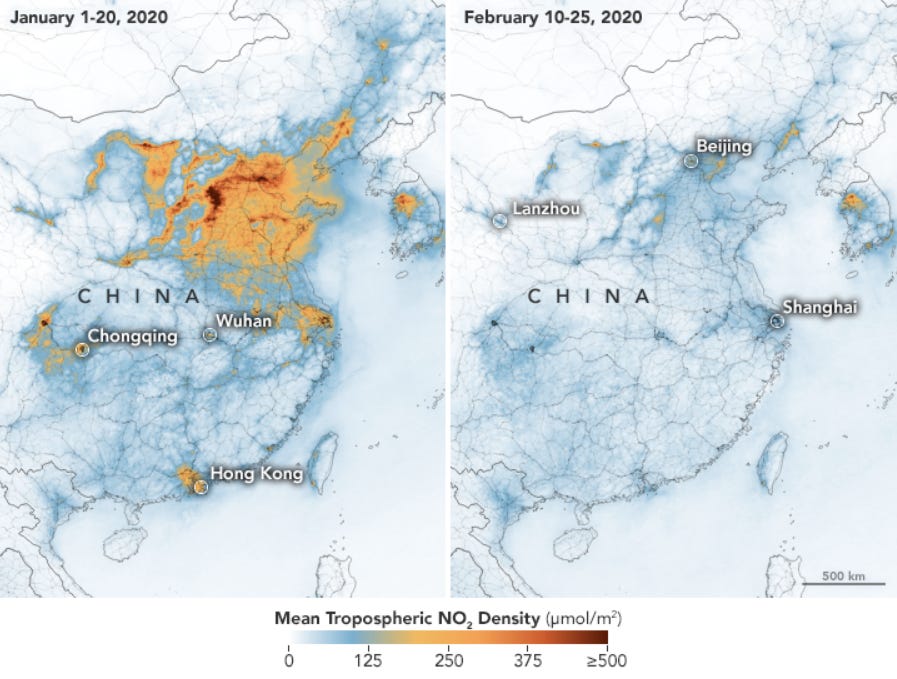 In the midst of this outbreak, recent satellite images were released by the American space agency NASA in conjunction with the European Space Agency showing a significant decrease in nitrogen dioxide (NO2) over China, the images show NO2 values from before the quarantine in January 2020 and during the quarantine in February 2020 in addition to the drastic declines in pollutants around Wuhan the first city to be quarantined, the agency reported that the reduction of nitrogen dioxide was due to the outbreak of the coronavirus and the Lunar New Year celebrations that took place in China, during these holidays businesses and factories close which results in a decrease in pollution, China's cities rank among the most polluted in the world.

“Carbon Brief” a UK based website designed to improve the understanding of climate change in terms of the science and the policy response estimated that the coronavirus had cut China's carbon emissions by 25% due to travel restrictions, longer holidays, and lower economic activity, China emitted around 300 million metric tons of carbon dioxide this year compared to 400 million metric tons in 2019.

If the short-term reductions last, annual emissions for the country will fall by 1% but experts suggest that there is no guarantee for this as long as China will continue burning coal and will double its use of cement & steel to ramp up production once the situation is under control.